No Bird Can Soar in a Calm | by Mike Saccocio

No Bird Can Soar in a Calm | by Mike Saccocio

An early observation the Wright Brothers made that helped them figure out the physics of flight was that birds in flight use their wings to catch the air.   They realized it wasn’t about sheer power but rather the ability to catch the wind and get lift out of it. They coined the counterintuitive phrase, “No bird can soar in a calm.”   You would think a good tailwind would help you get off the ground.  Not so, in fact, pilots would prefer to takeoff into a headwind… Headwinds give you lift.

As Christians we are living in a time of severe cultural storms in which the church has lost much of its influence and moral authority.  We have a choice to either run for cover and wait for calmer times or look to these headwinds for the lift we need and establish our moral authority on a humbler approach.

I think it boils down to three things which are a bit counterintuitive; 1) we have to listen in order to talk, 2) we have to learn in order to teach and, 3) we have to serve in order to lead.  As followers of Jesus, we are called to be proclaimers of the good news. That tells me I need to be talking; I need to be teaching; I need to be leading but not as a first priority.  It’s becoming more and more important for churches and faith-based organizations like ours to start on the other side of the equation with listen, learn and serve before we assume to talk, teach and lead.  Let me illustrate how this approach has helped us gain influence in our community.

City Mission is a 100-bed shelter, for men, women, and children that’s been around for over 100 years. We’re located in downtown Schenectady, NY across the street from a 2,700 seat theater called Proctor’s Theatre that’s part of the downtown revitalization. It’s beautiful and they get big Broadway shows to come in. The truth is, City Mission is not the most desirable neighbor to have when revitalization begins to happen in a downtown area.  Schenectady was solving this dilemma the old-fashioned way, with lawsuits. Businesses got together and said, “We can’t have this. We need to move these agencies to other places.” After they had moved a couple agencies out I figured it was only a matter of time before they came for us so I might as well take the lead.

I walked across the street and simply asked the CEO, “Phillip, how can City Mission help Proctor’s be more successful?” I thought he would say “Move,” but I was pleasantly surprised.  Instead he said, “We have a lot of people coming here who haven’t been downtown for a while and they don’t think it’s safe.  They park in this big garage that’s dark and cold and then run as fast as the can into the theater and that’s not what we want. We want them to walk around. We want them to shop. We want them to have dinner. We want the theater to be the culmination of a night downtown.  I wish we had people that would go out and greet our guests.”  I’m thinking to myself, “I don’t want to do that!” December in Schenectady gets real cold!  But I asked, was I now willing to listen, willing to learn, willing to serve?  So I said, “All right,” and we went out every night they had a show for the next three months. 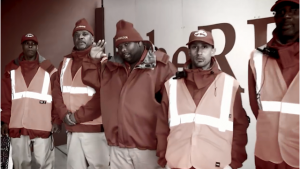 We got ourselves some red jackets and flashlights and called ourselves the Ambassadors.  The first couple days we just did a lot of smiling. But you have to understand, my people (the residents of the mission) they know how to hustle. They weren’t content with just smiling so they started “adding services.” They started walking people across the street and opening doors. They started finding out what the specials were in nearby restaurants.  Then we made a major capital investment; we bought umbrellas. You want to make somebody happy? Meet them at their car with an umbrella and walk them into the theater in the rain.

In the last month the play Wicked was doing a 30-show run at Proctor’s and the city decided to do a survey to see what people liked best about downtown. When they got the survey back, much to their surprise, the Ambassadors scored higher than the play! People liked the homeless greeters more than the show. We got a call asking, “If we pay your people, will you keep on doing this?” It became jobs, a new social enterprise.  Proctor’s actually raised ticket prices to hire the Ambassadors.

Sometime later I got a call from another businessman who said, “Mike, I have a problem. How come Proctor’s gets all the Ambassadors? We need Ambassadors, too.” When I told him Proctor’s pays them he said they would too and decided to start holding fundraisers.  In five years they’ve raised over $150,000 so the Ambassadors could expand and go to their businesses as well. I can say with some degree of confidence downtown Schenectady is the only downtown in America where the business people pay the homeless to stand in front of their businesses and greet their customers.

It didn’t end there. We got a call from someone in the health care field asking if we would be willing to form a group of health care ambassadors? So we started a social enterprise called Empower Health and from that created Schenectady Works as a workforce development program. We’re now partnering with over 40 businesses that ask our success coaches to come into their businesses and work with their underserved employees.

This has begun to change the paradigm of downtown. Suddenly people in poverty are being seen in a new and different way.  Not simply as problems to be managed but as gifted people with something unique to contribute. One of my great joys is now we have gatherings with the mayor, the chief of police, the head of business development, the CEO of the theater, and Ambassadors all sitting at that table talking about downtown. There is a growing appreciation that the life experiences of the Ambassadors have given them a unique and valuable understanding of life in an urban setting.

It’s so easy when you’re trying to make a case or defend your position to just shout louder than the crowd.  But where does that get us?  I’ve found a good headwind does indeed create unimaginable lift when we are willing to listen, learn and serve.  I’ve also found a small reality is more compelling than a grand theory.  Jesus said, “The kingdom of heaven is like a mustard seed which a man took and planted in his field. Though it is the smallest of seeds, when it grows it is the largest of garden plants, and becomes a tree so that the birds can come and perch in its branches.” May we have the faith and the courage to plant seeds of change, trusting that God can grow them into oaks of righteousness that will rebuild, restore, and renew our cities.

Michael Saccocio is executive director and CEO of City Mission in Schenectady, New York.  In addition to this role he has taken the lead in establishing an on-going, multi-sector initiative called Schenectady Bridges to help promote the “Bridges out of Poverty” framework as a citywide movement, linking social, business, education, healthcare, and faith-based sectors.

This was from Mike’s 2018 SATtalk.  Watch the whole video below.